Faith, Science, and Bad Religion in a World Without God 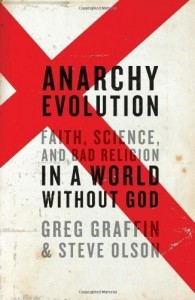 Anarchy Evolution is a provocative look at the collision between religion and science, by an author with unique authority: UCLA lecturer in Paleontology, and founding member of Bad Religion, Greg Graffin. Alongside science writer Steve Olson (whose Mapping Human Historywas a National Book Award finalist) Graffin delivers a powerful discussion sure to strike a chord with readers of Richard Dawkins’ The God Delusion or Christopher Hitchens God Is Not Great. Bad Religion die-hards, newer fans won over during the band’s 30th Anniversary Tour, and anyone interested in this increasingly important debate should check out this treatise on science from the god of punk rock. In this passionate polemic, Greg Graffin argues that art and science have a deep connection. He describes his own coming-of-age as an artist and the formation of his naturalist worldview over the past three decades. As an adolescent growing up when “drugs, sex, and trouble could be had on any given night,” Graffin discovered that the study of evolution provided a framework through which he could make sense of the world. While the battle between religion and science is often displayed in the starkest of terms, Anarchy Evolution provides fresh and nuanced insights into the long-standing debate about atheism and the human condition. It is a book for anyone who has ever wondered if God really exists.

“Graffin is a rare breed, indeed. He is a longtime punk rocker with the group Bad Religion who happens to have a PhD in zoology and is currently teaching evolution at UCLA. With the assistance of cowriter Olson, Graffin attempts to draw parallels between punk rock and various other subjects, including naturalism, evolution, and faith. Throughout, the author recounts events and perspectives from his life in punk, but he fails at times to keep his reminiscing in check. The book often reads like an autobiography, interlaced with scientific and philosophical observations. He does offer several thought-provoking chapters on atheism (a label Graffin eschews), natural selection, and the afterlife. Still, some of Graffin’s analogies may leave readers puzzled. In the chapter describing his particular brand of faith, Graffin compares the unspoken rules of mosh-pit conduct with evolutionary biology. With that in mind, the question is not whether punkers with an affinity for science will appreciate this book but whether anyone else will. Definitely a book that is as unique as its author.” –Wade Osbur, Booklist

“Take one man who rejects authority and religion, and leads a punk band. Take another man who wonders whether vertebrates arose in rivers or in the ocean, is fascinated by evolution, creativity, and Ice Age animals. Put them together, what do you get? Greg Graffin, and this uniquely fascinating book.” –Jared Diamond, Pulitzer Prize-winning author of Guns, Germs, and Steel and Collapse

“[Graffin] explains how evolution can be a guide to life.” –Scientific American

“Humble, challenging, and inspiring…. For Graffin, the appeal of both worlds was that, at their best, they challenged authority, dogma and given truths and opened up space for the anarchic process of creativity.” –Kirkus Reviews (starred review)

“Graffin is one of those rare people who seem to have combined two lives into one. He’s one of a small but growing number of atheists in the United States willing to talk about the damage they believe religion can do.” –Paste

“Bucking authority and the religious views of his family, Graffin explains how he has developed a personal philosophy that celebrates the power of nature.” –Nature

“Anarchy Evolution sets out to draw connections between evolution, naturalist thought and punk, an undertaking that might sound rife with the potential to be reachy—or preachy. But Graffin and Olson manage to weave the seemingly disparate concepts together into a satisfying narrative.” –LA Weekly

“Whether you’re a believer, an atheist, an agnostic, or anything in between, this is a necessary book.” –PopMatters