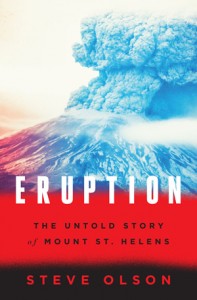 Survival narrative meets scientific, natural, and social history in the riveting story of a volcanic disaster.

For months in early 1980, scientists, journalists, sightseers, and nearby residents listened anxiously to rumblings in Mount St. Helens, part of the chain of western volcanoes fueled by the 700-mile-long Cascadia fault. Still, no one was prepared when an immense eruption took the top off of the mountain and laid waste to hundreds of square miles of verdant forests in southwestern Washington State. The eruption was one of the largest in human history, deposited ash in eleven U.S. states and five Canadian provinces, and caused more than one billion dollars in damage. It killed fifty-seven people, some as far as thirteen miles away from the volcano’s summit.

Shedding new light on the cataclysm, author Steve Olson interweaves the history and science behind this event with page-turning accounts of what happened to those who lived and those who died.

Powerful economic and historical forces influenced the fates of those around the volcano that sunny Sunday morning, including the construction of the nation’s railroads, the harvest of a continent’s vast forests, and the protection of America’s treasured public lands. The eruption of Mount St. Helens revealed how the past is constantly present in the lives of us all. At the same time, it transformed volcanic science, the study of environmental resilience, and, ultimately, our perceptions of what it will take to survive on an increasingly dangerous planet.

Rich with vivid personal stories of lumber tycoons, loggers, volcanologists, and conservationists, Eruption delivers a spellbinding narrative built from the testimonies of those closest to the disaster, and an epic tale of our fraught relationship with the natural world.

“A National Book Award finalist unravels the compelling back story of the 1980 eruption of Mount St. Helens.

Olson (Count Down: Six Kids Vie for Glory at the World’s Toughest Math Competition, 2003, etc.) combines nature writing with an investigative focus on the political, economic, and historical factors that changed the way scientists study volcanoes. Whether the author is delving into the dangers of working in the timber industry, offering an overview of the state of volcanology in 1980, or recounting the stories of individuals living and working near Mount St. Helens, his writing propels readers swiftly along as the story races toward the massive blast and its aftermath. Olson details the story of Weyerhaeuser, the infamous Washington logging company that owned “substantial portions of the land between Mount St. Helens and the Pacific Ocean.” The author weaves in both the corporate and family history of the Weyerhaeusers (“an American dynasty”), using that remarkable story as foundation for his narrative. This framework offers a compelling look into the region’s environmental and social history and how the company and the timber industry shaped a region. “It is difficult to overstate the significance of Weyerhaeuser Company to the history of the Pacific Northwest,” writes the author. “Weyerhaeuser and other economic interests have formed the backdrop against which much of the region’s history has played out.” Olson pinpoints 1980, the year of the eruption, as significant due to the social, economic, and environmental changes taking shape across America and what these shifts meant for the timber industry. The author provides an engrossing explanation of volcanology during the 1980s and how the eruption of Mount St. Helens altered the prevailing science. He also captures the forgotten or untold stories of the individuals who perished in the blast and describes the political wrangling surrounding the status of the devastated area.

“Eruption is everything a nonfiction book should be: Marvelous storytelling mixed with a great cast of characters, fascinating science, and little-known history. Anyone with even a passing interest in the Pacific Northwest or volcanoes will love this book. I read it in three long, satisfying gulps, and, like all great books, its stories linger in the mind long after you’ve read the last page.” —Tom Campbell, The Regulator Bookshop, Durham, NC – See more at: http://www.bookweb.org/news/march-2016-indie-next-list-preview#sthash.UQQLPLng.dpuf