Genes, Race, and Our Common Orgins 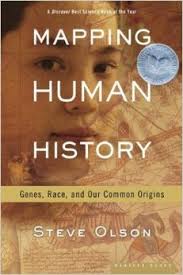 In a journey across four continents, acclaimed science writer Steve Olson traces the origins of modern humans and the migrations of our ancestors throughout the world over the past 150,000 years. Like Jared Diamond’s Guns, Germs and Steel, Mapping Human History is a groundbreaking synthesis of science and history. Drawing on a wide range of sources, including the latest genetic research, linguistic evidence, and archaeological findings, Olson reveals the surprising unity among modern humans and “demonstrates just how naive some of our ideas about our human ancestry have been” (Discover).Olson offers a genealogy of all humanity, explaining, for instance, why everyone can claim Julius Caesar and Confucius as forebears. Olson also provides startling new perspectives on the invention of agriculture, the peopling of the Americas, the origins of language, the history of the Jews, and more. An engaging and lucid account, Mapping Human History will forever change how we think about ourselves and our relations with others.

Mapping Human History was a National Book Awards finalist in 2002 and won the Science-in-Society Award from the National Association of Science Writers.

“Steve Olson masterfully describes one of the most profound insights to be gleaned from the Human Genome Project: the remarkable unity of the human species at the genetic level. While Olson takes the reader on a breathtaking tour of more than 100,000 years of human history, he also explores implications deeply relevant for our modern world. This is a wonderful and important book.” — Eric S. Lander, director of the Whitehead Institute/MIT, Center for Genome Research, and professor of biology at Massachusetts Institute of Technology“Olson does an admirable job of presenting an up-to-date, consensus view of what genetics tells us about who we are and how we got here as a species. The book’s central message concerns genetics and race: the classification of humans into racial categories ignores the biological reality of the overwhelming genetic similarity of outwardly different-seeming individuals . . . [The] author’s lucid explication of this theme is noteworthy and valuable, particularly for a general audience. Even some geneticists in the field would benefit from being reminded of the fundamentally misleading nature of population trees which presuppose a sorting of individuals into neat categories . . . Mapping Human History lucidly conveys the utters senselessness of categorizing people in the face of the interconnectedness of all humanity.” — Linda Vigilant, Max Planck Institute for Evolutionary Anthropology, in Science“Few pursuits are as intrinsically fascinating as unraveling the history of how human populations have inhabited almost all regions worldwide. Steve Olson has turned this scientific endeavor into a compelling detective story that illuminates as well as entertains.” — Ian Tattersall, author of Extinct Humans and Becoming Human, and curator at the American Museum of Natural History“Olson contends that understanding the ancient history gleaned from DNA bears directly on two of the world’s hot-button issues: race and ethnicity. His book demonstrates just how naïve some of our ideas about human ancestry have been.” — Carl Zimmer in Discover“Olson provides an entertaining introduction to the ways in which genetics can illustrate human prehistory. Where there are neither written records nor physical artifacts, genes in our living bodies can provide invaluable data . . . Olson shows how the early history of Africa, Asia, Europe, the Middle East, and the Americas, not to mention of humankind itself, can be illuminated through our genes. But he is equally clear about what genetics do not tell us. By inspecting an individual’s genome we might be able to say that he or she has a certain probability of belonging to a particular population. But this does not mean that genes define the groups to which individuals belong. Olson’s is a steady hand to help guide us though these treacherous waters.” — Kenan Malik in the Sunday Telegraph (London)” [An] engaging reevalution of humanity’s collective self-image . . . Noteworthy are [Olson’s] fine chapters on encounters between Neandertals and our early modern forebears; the way agriculture spawned ethnicity, kinship, and nationalism in the Middle East; and the basic similarities among the 5,000 languages spoken on the planet . . . [An] engaging and fast-paced look at a subject that has profound implications for our everyday lives.” — Publishers Weekly“One of the exciting findings from my team’s effort to sequence the human genome is the support for the notion that race is a social concept, not a scientific one. Steve Olson’s book illustrates in a very readable and fascinating way that humans are all closely related to one another. This book is for all readers.” — Craig Venter, leader of the private effort to sequence the human genome and board member of the Institute for Genomic Research“The take-home message of this five-continent trek by science writer Olson is that races don’t exist; genetically, we are all sisters and brothers under the skin. That message has been promulgated in the press and professional literature lately as geneticists track the DNA in the human genome as well as in a cell’s mitochondria. These are the power factories that lie outside the cell nucleus, and we inherit them from our mothers. But Olson raises the level of discourse to a new high, assembling powerful evidence to support the no-races hypothesis.” — Kirkus Reviews“In an instructive overview of human history, science journalist Steve Olson uses genetic evidence to trace the movement of modern humans out of Africa and into the rest of the world. Mutations — genetic mistakes — are the key. Mutations happen all the time, resulting in superficial differences like skin color, height, and eyelid folds. By tracing the spread of those variations, it is possible to reconstruct the complex movements of human populations. ” — Rob Mitchell in the Boston Herald“Mapping Human History has an important and engrossing tale to tell, and Olson tells it well . . . And in a world of knowledge fragmentation, it is nice to catch sight of how such diverse subjects as history and genetics can be mutually informing.” — Steven Rose, professor of biology at the Open University, in the Guardian (London)]

“This book nicely outlines the potential of human genetics to improve not only human health but also our understanding of our common origins and history. It deserves to be read and enjoyed by a wide audience.” — Lynn Jorde in the American Journal of Human Genetics

Q&A with the Author