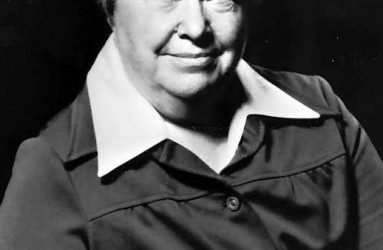 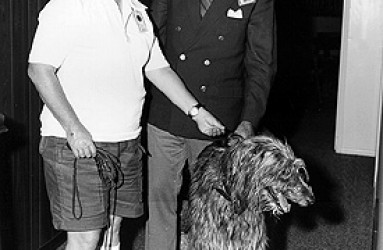 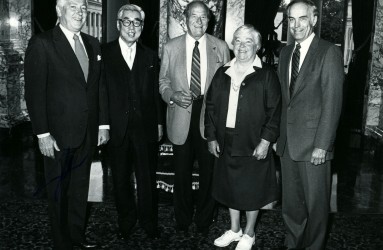 Dixy Lee Ray was born on September 3, 1914. She was the 17th Governor of Washington State and the state’s first female governor. She was born second of five girls and named Marguerite Ray by her parents Frances Adams and Alvis Marion Ray. Her father was a commercial printer while her mother cared for the children and ran the house. Ray had a difficult relationship with her father, whose alchohol abuse brought out angry, manipulative behavior. She said, “Not in my whole life can I recall even the faintest stirring of affection for him.”[i] She was a tomboy growing up and was often referred to as “the little dickens,” meaning the little devil. Over time, Dickens evolved to Dixy. The name Lee came from the migration of people from North Carolina and Virginia to the Pacific Northwest after the Civil War and particularly referenced her family’s relation to Robert E. Lee. In 1930 she legally changed her name to Dixy Lee.

Ray was exposed to the outdoors constantly as a child. Her family spent summers on Fox Island and at age 12 she climbed Mount Rainier. She was the youngest girl on record to do so at the time. From an early age, Ray fostered a love for the animals that she discovered in exploring the tide pools and waters of Puget Sound.

She was valedictorian at Mills College in Oakland, California, where she graduated in 1937 with a bachelors in zoology. Originally she studied drama and theater, but quickly switched to science. She received a master’s degree in 1938 with a thesis entitled “A comparative Study of the Life Habits of Some Species of Burrowing Eumaloacostraca.” Ray received no financial support from her family through college. Instead, she worked many odd jobs to get herself through—puppeteer, janitor, waitress, and housepainter. She said, “I missed a lot of sleep in those days, but never a class.”[ii] Ray taught for several years in California schools before receiving her PhD from Stanford in biological science.

After her graduate studies were completed, Ray’s first job was on the faculty at the University of Washington, where she taught and did research for 26 years, between 1963 and 1972. She was awarded a Guggenheim fellowship in 1952. She sailed as chief scientist aboard the Stanford research ship Te Vega on the International Indian Ocean Expedition, a journey that took nearly a month to complete. In 1960, Ray took a leave of absence from the University of Washington to serve on the National Science Foundation as Special Consultant in Biological Oceanography. She was the director of Seattle’s Pacific Science Center. She was its guiding force after it began as a part of the 1962 World’s fair. Ray’s work was credited with saving the Pacific Science Center. Ray also hosted a weekly television series on local Seattle station KCTS called “Animals of the Sea.”

In 1973 Ray was appointed to chair the U.S. Atomic Energy Commission by Richard Nixon. Although she initially refused the job, Nixon was persuasive in his desire to have her on the commission. He convinced her that it would be the opportunity to usher in a new era of science and to further public understanding of scientific issues, which was of upmost interest to Ray. She was the only woman in the AEC. She was adamantly pro-nuclear. She constantly mitigated the risks of atomic radiation and wanted more atomic power plants to be constructed. She became known for her eccentric ways during her three-year service because she lived in a mobile home in rural Virginia, wore white knee socks, and took her dogs, a 100-pound Scottish deerhound named Ghillie and a miniature poodle named Jaque, to the office. She was chauffeured to the AEC offices in Germantown, Maryland by a limousine every day. She served until the AEC was decommissioned.

In 1974, she aided in a discovery regarding nuclear power plant safety. It purported “that the chance of mass destruction from a reactor accident was as unlikely as that of a meteor striking an urban area.” She said, “There is no question that the nuclear industry comes off very well.”[iii] In 1975 Ray was chosen to serve as the first Assistant Secretary of State for Oceans and International Environmental and Scientific Affairs. She only worked under this title for a brief time until she decided to return to Washington State. After her time in Washington D.C., she had realized that there was a great opportunity to improve the functions of government, particularly in technical areas, at a state level. By the time she returned to her home state, complaining that Kissinger had given her the cold shoulder, Ray was already over 60 years old.

In 1976, Ray decided to run for Governor under the Democratic Party. She chose the party somewhat arbitrarily, since she wasn’t particularly interested in party politics and the Republican slate for that year’s election was already full. At the time, the Democratic Party was in total disarray so Ray had an easy time securing the nomination. She had a deep-seated aversion to Senator Warren Magnuson that lasted throughout her career. Despite her brash, outspoken personality, she managed to win public favor and was elected to serve a single term. On election night in 1976 when asked to explain her success she responded, “It can’t be because I’m so pretty?”[iv]Her campaign literature called her “the extraordinary lady from Fox Island.” Her campaign emphasized her populist roots, quick it, ad outsider status.[v]

During her time as governor, Ray lived in the governor’s mansion with her two poodles, although she tried to return to her motor home on the weekends and enjoy the great outdoors. She hired her older sister Marion R. Reid to serve as her secretary and official hostess. Her sister convinced her to wear blouses over men’s shirts and to let go of her trademark knee socks. Once in office, Ray quickly drew criticism from her own party for her strongly conservative views especially in terms of environmental and energy policy. She was criticized for her insistence that huge oil tankers be allowed to dock in Puget Sound. She lost favor with many women supporters when she refused to campaign for the Equal Rights Amendment to the United States Constitution. During that time, the state also chose a site at Hanford to purchase for the disposal of dangerous non-nuclear wastes. She established a Washington State Hazardous Materials Commission in 1978. She wanted the five Washington Public Power Supply System nuclear power plants at Satsop and Hanford to be completed.[vi] She was often quoted making outlandish assertions, such as “There is no evidence that survivors of the Hiroshima bombings have suffered any more cancer than anyone else, including the second generation. The problems facing the nuclear industry are largely raised by fears of the public, but we all know that fear requires ignorance.”[vii] Ray’s feuds with the news media, and particularly with the Post-Intelligencer, became legendary. In 1978, she named a littler of 11 piglets born at Fox Island after various reporters. In 1979, she treated reporters to sausages made from those piglets.”[viii]

However, she also balanced the state budget and oversaw the state’s first full funding for basic education. She also was known to be a friend of the Northwest aircraft industry. Ray was governor when Mount St. Helens came to life in March of 1980, after 123 years of dormancy. On April 2 she declared a state of emergency, which allowed the National guard to assist State Patrol troopers and sheriffs deputies from Cowlitz County and Skamania County. Ray issued an executive order that spelled out the red and blue zones that surrounded the mountain. She warned people to stay outside of the safety boundaries.

In 1980 she lost the Democratic primary election to the state senator Jim McDermott, who won with a 59% majority.[ix] McDermott proceeded to lose the general election to moderate Republican John D. Spellman She left the office in January 1981 when Spellman took the Oath of Office.

Ray co-authored two books, Trashing the Planet and Environmental Overkill, with Lou Guzzo that critiqued the environmentalist movement. Guzzo was the former managing editor of the Seattle Post-Intelligencer. As governor, Guzzo was on her staff as a counselor and as head of the Arts Commission and historical preservation group. In her 1990 book Trashing the Planet she accused Rachel Carson of global malarial deaths because of Carson’s opposition to DD. The book discussed scientific means of environmental management and media distortion of environmental issues. In Trashing the Planet she refutes evidence of global warming, claiming that temperature records over the past hundred years show no increase in global temperatures. She also asserted that the extinction of the human species is not only inevitable but may be a good thing. In Trashing the Planet, Ray is also highly critical of the popular press, who she accused of sensational and one-sided reporting. [x]

After leaving the governor’s mansion, Ray retired to her farm on Fox Island, growing vegetables, fruits and berries, raising chickens, writing, and carving wood in the style of the North Coast Indians. Ray died at the age of 79 in her Fox Island home on January 2, 1994 after suffering for months from a severe bronchial condition. She never married. In 1998 the American Society of Mechanical Engineers created a Dixy Lee Ray Award to honor her “significant achievements and contributions in the broad field of environmental protection” and her “advocacy to the development of those techniques that serve humanity.”[xi]